Are You Drinking Too Much Water? Part II 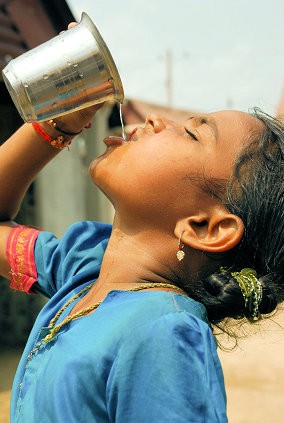 When to Drink or Not Drink Water

In the August 2009 issue of Pacific Wellness Quarterly, I addressed the potential health issues that can arise from drinking too much water.

I stated that the oft-repeated guideline “eight glasses of water a day” should not be applied uniformly; rather, the recommendation should be adjusted on an individual basis.  I can obtain a fairly good sense of a patient’s hydration status by examining his or her skin, face, legs, and tongue and asking a few questions, including the color of the patient’s urine.  In my opinion, despite the commonly held belief to the contrary, chronic systemic dehydration is rather rare in Canada except in cases in which a patient is taking certain medications or on recreational drugs.  I doubt that most of us really need to (or even should) sip water all day, as some health practitioners recommend unless we are in direct sun or performing rigorous physical activity.  Thus, I generally recommend that individual drink water only when he or she feels thirsty.  There are, however, a couple of important time periods to keep in mind regarding water consumption.

Though it was not necessarily the case historically in many regions of the world, almost all of us who live in modern cities today can obtain fresh water virtually everywhere at any time, thanks to contemporary sanitation infrastructure developments and the ubiquitous presence of convenience stores.  In addition, we can obtain fresh beverages that are nicely chilled.  It is important to keep in mind that cold beverages, including cold water, chilled beer, and soda pop served in ice-filled glasses, have been conveniently available only in recent decades since the invention of freezers and refrigerators.  In traditional East Asian medicine, it has long been believed that our digestive tracts should not be cooled down, regardless of each person’s constitution (i.e., whether he or she is a hot or cold type).  I do not think our bodies have adapted to handle large quantities of cold drinks and frozen desserts.  It is, therefore, best to drink water at room temperature.

The Importance of Considering the Quality of Water Intake

I think the media and health advocates have too broadly emphasized the importance of drinking more water in recent years. Adequate water intake is essential for our health.  However, it is important to consider not only the quantity but also the quality of water intake, which includes water temperature and the timing of consumption.